With Apologies to Bob Dylan, The Times, they are A-changin'

With Apologies to Bob Dylan, The Times, they are A-changin'
​Point-counterpoint

who is buying all your stuff?
Baby boomers, that's who

SHOW ME THE MONEY

Hey retailers, where is all the money? I’ll “show you the money”. I’ll write, show you the facts, and you decide if your marketing is on/OFF target.

Recently the digital marketing industry went into a meltdown when Procter & Gamble announced they were ditching digital … because it was NOT moving the needle .. AT ALL!

PROCTER AND GAMBLE CUT $100,000,000.00 OUT OF THEIR BUDGET ... ELIMINATING DIGITAL ADVERTISING BECAUSE IT DOESN’T WORK, AND THEY ARE THE LARGEST ADVERTISER IN NORTH AMERICA …. GOT YOUR ATTENTION YET?

P&G Cuts More Than $100 Million in ‘Largely Ineffective’ Digital Ads - CLICK TO READ
Who are you marketing to? Not Me and I’m one of those 70-percenters.

I’m a Boomer, as is my wife, we watch TV, we look at the messages and especially the messengers/actors delivering the messages ... most of the time with disbelief. We always ask ourselves who are they speaking too? And more often than not, we have NO desire to engage with those brands, here’s why.

They aren’t speaking to us, they aren’t even trying and most often they are offending our intelligence.

I roll my eyes when brands depict men as DWEEBS –

“    A person regarded as physically and socially awkward and has little confidence, sometimes they're just plain foolish,

​And women as
​
Lacking the intelligence and independence, that are supposedly in relationships with these Dweebs, rolling their eyes at these men because of their ineptness and/or childish behaviors, accepting they’re incapable and that’s supposed to be alluring or attractive to them?

​None of these characterizations fit my perception, or my wife's perception, of what men and women are, or as they should be depicted, as I have come to appreciate and experience them in real life. I think it’s just plain insulting to all genders, but that’s me.

​Why is this happening?

My guess is that the people creating these types of marketing platforms/messaging are actually targeting themselves, their demographics and not the people with the money, BOOMERS!

That’s MY perception and thankfully I have a DVR, stream Netflix and I don’t have to watch these characterizations. Plus, I don’t have to do eye-rolls ... all the time ..., which eliminates headaches. It's these targeted messages to a demographic that I think marketers have it mostly wrong and here's why.

The problem as I see it is that everyone, including probably you, are focused on Millennials and most likely your marketing is being influenced by Millennials on your marketing staff that believes they have to focus your marketing dollars on marketing to Millennials. The problem is Millennials don’t have much money if any at all – as I’ve documented here. I get it, they are the largest demographic and you want to be sure you capture their hearts, mind, and soul for your brand/store …. LONG TERM.
But consider this when everyone tells you to spend all your money on them.


OK, I need to clarify, about this age group. I have three Millennial kids and they are very successful and these numbers don’t apply to them as it probably doesn’t for many in this generation. Yes, they are starting to buy homes, improve their financials, find better jobs, but facts are still facts.

By listening to all the Fad Marketing Hype, You are missing out on the demographics that have all the money, NOW, and that’s probably while your sales aren’t growing or worse, shrinking.

It’s NOT the Millennials (as I’ve proven with the above information and link to previous articles Ed and I wrote) it’s the BOOMERS 50+ that have all the money, and you’re not marketing to them and according to VISA, they will drive consumer spending for the next 5-10 years!

The 50-plus and 60-plus population is clearly playing a large role in consumer spending and older consumers are going to become more significant as these trends intensify,” says Wayne Best, chief economist of Visa.

​Toss in 53- and 54-year-olds and the boomer- and-older set – like me comprise about half of all consumption, according to visa and Moody’s analytics. (OUCH, Oh the money I spend on Amazon)

And Boomers are Savvy consumers

When it comes to shopping on mobile, one in four people aged 55 and older do so, according to a report by BI Intelligence, a research service from Business Insider.

Further, 24% of online shoppers fall between the ages of 45 and 54, though that age group represents less than 20% of the population. boomers generate more than 51% of the spending in the United States (and have a total annual economic activity of roughly $7.6 trillion, according to AARP).

Regardless of where or how that 51% of spending occurs, the fact is older consumers represent a sizable and potentially lucrative long-term market base for digital retail.

For instance, boomers purchase half of the computers and two-thirds of the new cars sold annually, according to Bloomberg Business Week. OMG imagine what they could be spending in your store IF you marketed to them?
​
Baby boomers are expected to inherit $8.4 trillion by 2030, according to research by the Center for Retirement Research at Boston College. This means their spending power is likely going to escalate, and possibly in windfall ways.
​
So, here’s what I’d do.
​

Or,  keep marketing to the Snapchat Generation and see where that gets you.

In the 60’s Bob Dylan penned a song “The Times They Are A-Changin'” and I would encourage the Boomer generation who thought that our parents, congressmen, and people who are now our age–were out of touch dopes–to revisit it.

Alas, there is more to economics than counting the money.  The only proven way to predict the future it is to follow the demographics, historical purchase patterns, and common sense.  It doesn’t really matter where the wealth is concentrated. That is a red herring. Whether you are rich or poor, old or young, everyone needs a place to sleep, a place to eat and a place to watch television. In other words, everyone needs furniture. They may have less money to pay for it, but they still need it.  Let me remind you Bill why you were so successful at Ashley.  While those of us in the traditional ranks of home furnishings watched our share dwindle while we proselytized the value of the details of fine finishes and craftsmanship—Ashley pioneered the concept of buy it today, have it in your home tomorrow, and don’t pay for it for several years. This appealed greatly to the 35-44 cohort, and I would argue that this is still a good strategy.

In 2016, Jerry Epperson published the following set of charts chronicling expenditures by age for the various furniture categories.  The chart on the bottom left is probably the most instructive because it weights each of the categories.  To make a long story short, furniture purchasing peaks in the 35 to 44 age cohort, and declines precipitously from there. With the exception of the outdoor and upholstered chairs, that trend is pretty consistent. 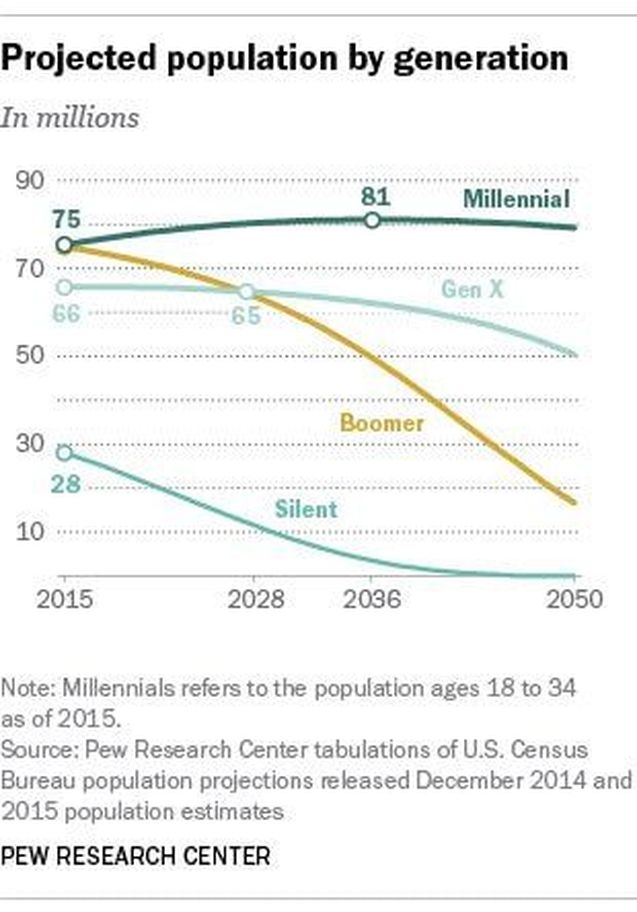 Let me remind the reader that the so-called millennial’s are now 21-37. Demographers disagree, but the date range most experts use comes from Pew Research Center, because they are most reputable. They peg millennials as those who were born between 1981 and 1997.  And, while boomers and millennial’s are approximately equal in size now, you can see Boomers will drop precipitously in the near future.

To use a hunting analogy, if you were shooting ducks, you need to lead them by shooting in front of them. If you shoot at them or behind them you will miss them every time.

To translate this metaphor into furniture marketing, you better be prepared to start targeting millennial’s.  You will get a few boomers who think of themselves as being young at heart.  If you watch enough television you will be reminded that we are a culture that celebrates youth.  And, whether it is fashion or Technology, the models used are always 10 years younger than the target.

Let’s set aside the facts, figures and statistics for minute and approach this question with common sense. Why do boomers buy less and less furniture the older they get?
It’s not all doom and gloom. I have great confidence in home furnishings industry because people will always need what we have to offer.  The US furniture industry has grown at a CAGR of 5.6% for the Period from 1970 to 2016, while remaining stable during economic cycles. Our sector has experienced positive year-over-year growth in 41 out of 46 years, an experienced sales decline of greater than 3% in only three periods.  This is a very healthy industry that has not suffered disruption like other sectors.  And, regardless of external factors, people need to eat, sleep, and consume media.

You and I each make our living by counseling the home furnishing industry on how to grow their business.  While we may different tactics, I think we agree at the essence of success is differentiation.  That can take the form of products, Service, convenience or channels of distribution. Anyone or combination of these delivers superior value and it is up to the marketer to communicate what that difference is and why it matters.  Marketers must always reinvent themselves, for the times they are changin’.

​The Times They Are A-Changin'
Bob Dylan