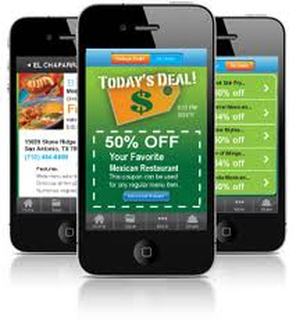 Smart shoppers are consulting multiple platforms to aid with shopping and to save money, according to recent surveys. Not only are they cashing in print and online coupons, but consumers are increasingly using their smartphones to get deals while in the store. According to a July study by media and marketing services companyValassis, due to rising food and gas prices, 74% of US consumers planned to use more coupons this year.

Digging deeper into the Valassis findings, of consumers using a smartphone for savings, 21% accessed a coupon in an email, 19% used the device to compare deals, and 18% downloaded the coupon on their phone.

Seasonal and holiday shopping typically yields a lot of coupon and deal seeking. Smartphones played a particularly prominent role in back-to-school shopping this year. According to the IAB, and Meredith Parents Network, moms used smartphones to save money and strategize their shopping trips. The August study indicated that 25% of US mom internet users employed their smartphones to find coupons and discounts at nearby stores. Twenty-one percent used smartphones to build and check shopping lists, and 20% used their devices to actually shop online. Locating nearby retailers and managing and organizing coupons were less popular activities.

A July back-to-school shopping report conducted by research and consulting firm Deloitte also showed that US parents planned to use their smartphones more for school shopping in 2012 than they did in 2011. Although there were only slight increases in the various shopping activities, areas of greatest growth appeared to be around using smartphones to access product information and to shop online.

Growth in those particular areas could be due to retailers developing more sophisticated mobile-optimized websites that enable consumers to easily shop while on the go. As the smartphone landscape continues to evolve and smartphone adoption reaches the masses, smartphone shopping will grow, as well. The launch of the iPhone 5 brought rumors of smartphone coupons becoming more of a reality thanks to the introduction of a Passbook app, which is said to rival Google Wallet. Only time will tell, though, whether consumers will adopt such technology, and if stores will be able to keep up with these advancements.