The answer, of course, is you.

For years, Baby Boomers were the gravy to the home furnishings retailer’s train. Like clockwork, they’d waltz through your front door every seven years or so—sooner if that big promotion came through or they finally bought that lake house—looking for a sofa or bedroom group.

Only now that gravy train is slowing down. Baby Boomers are downsizing. Those 3,500-square-foot homes are now (gasp!)1,800-square-foot townhomes. Even worse, Boomers have grown accustomed to that 16-year-old recliner so there’s no sense in changing things now.

Millennials—consumers born between 1980 and 2000—are the demographic every home furnishings store is chasing and with good reason: With almost 80 million of them, they’re the nation’s largest population segment. That $170 billion in annual purchasing power they wield isn’t too shabby either.

And they’re only getting bigger. One Accenture study believes Millennials will come into their own by 2020 when their spending in the United States will grow to $1.4 trillion— that’s trillion with a T—annually and represent almost a third of total retail sales.

One more thing: Millennials want furniture. They spent more than $27 billion on
it last year, according to Furniture Today’s Consumer Buying Trends, compared to $11 billion in 2012. They account for 37 percent of all furniture and bedding purchases. The back-of-napkin math doesn’t lie: That’s a 142-percent increase over two years. Those same two years saw Baby Boomers’ furniture spending drop 17 percent.

Marisa Peacock knows the importance of retailers hooking up with Millennials and has spent the past several years playing matchmaker.

“All these Millennials represent a huge opportunity for home furnishings retailers because they’re starting families and beginning to settle into homes just like their boomer parents,” says Peacock, whose company, The Strategic Peacock, helps small businesses target Millennials and their disposable income.

Her job is not as easy as it may sound.

That’s because Millennials don’t walk, talk and buy like Generation Xers or their Boomer parents. They’ve grown up in a world where newspapers, magazines and print advertising are heading the way of Morse Code. They get much of their entertainment and news from a laptop or tablet. They’ve seen what the Great Recession did to their parents’ retirement plans and are wondering if they’ll ever pay off those monstrous college loans. In other words, the tried-and-true ways of connecting with Boomers the past 40 years won’t work with Millennials.

“You have to understand Millennials before you can even begin to connect with them,” says Peacock. “Once you know where they’re coming from, the world they’ve grown up in, you can better engage with them.”
In Ohio, Coconis Furnituretook a second look at the way it was spending money on its advertising. For years the store stuck to the traditional mediums of print, radio, television and direct mail. Last year the company dedicated about 15 percent of its budget to digital advertising and email marketing campaigns. Traffic to the store’s website has exploded. Bo Coconis, a buyer and merchandiser who pushed hard for the campaign, is so pleased with the results he’s pushing his father to buy tablets for store employees to expedite checkouts and is thinking of hiring a full-time employee to manage the company’s social media and answer questions at the store’s online chat.

“It’s all about finding out where Millennials are in their lives and meeting them
there,” says Coconis, who, at 30 years old, knows a thing or two about his generation. “You can connect with them once you know what makes them tick.”

And therein lies the $64,000 question, or in the case of the Millennials’ projected furniture buying power this year, the $35 billion, question: What makes Millennials tick?

For starters, no offense Boomers, but they don’t really care for your advice. Older Americans tend to trust the counsel of friends and family members when making a big purchase such as furniture. Most Millennials, on the other hand, don’t want their parents’ or peers’ help. Think back to the Great Recession, soaring unemployment and seemingly daily bailouts. Can you blame them?

According to a Harvard Business Review Study, 51 percent of Millennials say they not only trust but also prefer product reviews from people they don’t know.
Davis ended up buying a new table and four chairs at City Supply Co. in Charlotte because they had exactly what she was looking for and because of the glowing reviews she read online from complete strangers.

We know what you’re thinking: A Millennial actually put down her laptop and smartphone long enough to enter a brick-and-mortar store? 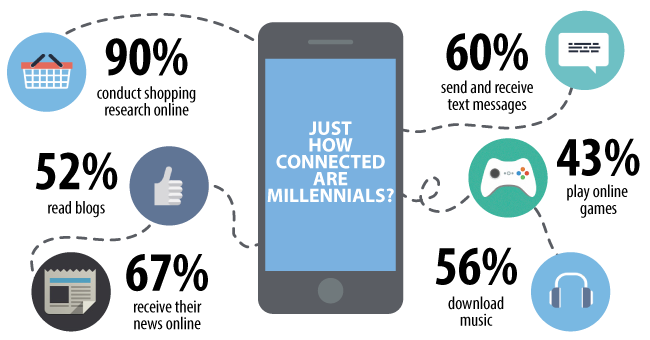 While Millennials have earned a reputation for viewing and engaging the world through a digital lens, they still venture outdoors. In fact, members of the digital generation prefer visiting stores to shopping online. “I need to see the chairs, the grain of the table,” says Davis. “You can’t tell something’s quality from a photo on the Internet.”

For years Bill Napier, a strategic consultant to several companies in the home furnishings industry has preached that retailers need to see the Internet as their partner rather than their enemy.

“Eighty percent of consumers including Millennials want to buy local,” he says. “Sure they’re going to do their homework online, but if you’re competitive on price and can offer a good return policy, Millennials are as smart as any other generation. They’re going to want to do business in your store.”

Davis said she did just that in shopping for her kitchen table and chairs, spending about four hours researching online over two weeks before heading out.

It’s not that Millennials are spoiled or possess a sense of entitlement, says Peacock, it’s the world they grew up in. Peacock likes to use a music analogy to compare Millennials to their parents. (Warning: the following paragraph might make you feel old. Very old).

“Baby Boomers grew up listening to their music on record players or eight-track tapes and then cassette tapes, and then they switched to CDs and later to iPods,” says Peacock. “Millennials don’t know anything but digital music. So when they walk into a store after viewing something they like on a website they don’t understand why the retailer is handing them a printed piece of paper with the sofa on it. They want to see it on a screen just like they did back at home or in the coffee shop. They leave wondering, ‘Why doesn’t the store have what the website has?’ ”

Evan Faller, business development officer for Furniture Wizard, believes one the biggest mistakes retailers can make with Millennials is not ensuring a seamless transition from your website to your store.

“If you put your website together and brand it as your store with 50,000 products available and then your store doesn’t match that experience, right off the bat you’ve got a huge disconnect with the Millennial,” he says. “And let’s be honest here, that statement probably goes for any consumer, but it applies even more to the Millennial consumer who’s used to having things a certain, consistent way.”

X consumers for years through a committed online presence. How committed? Half of Weisblatt’s advertising budget is invested in search optimizing on the Internet, live chats on his store’s website and targeted email campaigns.

Weisblatt says traditional advertising is lost on Millennials. “They’re living lives that are completely different to Boomers and even (Generation X),” he says. “You still need to advertise on all your traditional channels, but if you’re not advertising online, you’re not relevant to them because they’re not going to know anything about you. To them you don’t even exist until you’re online.”

Coconis agrees. “I don’t watch TV, I don’t get a newspaper and I rarely listen to the radio,” he says. “The best way to get hold of me is through email. Again, it all comes down to reaching them where they are in their life.”

Peacock takes that theory one step further, arguing that instead of waiting for Millennials to fall into traditional consumption patterns (“There’s nothing traditional about Millennials,” she says), home furnishings retailers should take the time to understand the complex factors that compel Millennials to spend.

Marketing strategies, she says, should be geared to where Millennials values lie, instead of where the status quo (read: Boomers) expects them to be.

A good example is the popular (and true) narrative that Millennials are more empathetic to our environment than Boomers or Gen Xers. “That needs to be part of your marketing strategy,” says Peacock. “Millennials who are looking to buy a coffee table might be reluctant if their afraid that it will be obsolete or thrown out when they decide to upgrade if they get married or have a family. It’s (the retailer’s) job to show that that product can be recycled or already was recycled in some fashion. Retailers need to ask themselves if they’re pursuing the wants and needs, sure. But at the same time are they pursuing the Millennial’s values?”

Weisblatt offers one more piece of advice about pursuing Millennials: A year or two from now, prepare to throw everything you’ve just read out the window. “Technology is such that everything changes so fast and Millennials are quick to adapt. What you implement today might be obsolete a year from now so be ready to change.” But when it comes to Millennials, they’re worth the pursuit.