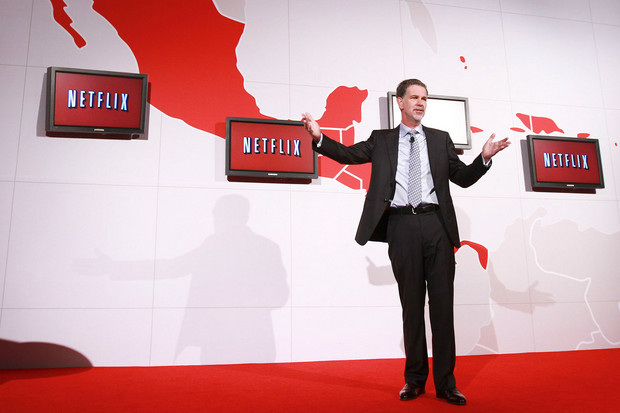 "Netflix has already become the “most viewed cable network on television”, according to Richard Greenfield an analyst for BTIG, a global equity trading firm".

Netflix, based in Los Gatos, California, climbed 6.2 percent to $72.04 at the close, its biggest gain since May 23. The shares have gained 4 percent this year.

Chief Executive Officer Reed Hastings, in a posting on his Facebook page today, said that customers watched more than 1 billion hours of movies and TV shows online last month, a record for the company. The stock also climbed after Mark Mahaney, an analyst at Citigroup Inc. (C) in San Francisco, reiterated a buy recommendation on Netflix shares, calling the price “highly reasonable.” His target is $130 a share.

Netflix said in January that viewing in the final three months of 2011 totaled more than 2 billion hours. Joris Evers, a company spokesman, declined to provide the previous record.

“When ‘House of Cards’ and ‘Arrested Development’ debut, we’ll blow these records away,” Hastings wrote.

Last month, Neflix said it is testing a redesign of its website that separates movie viewing options from its growing television catalog.

By splitting off films from television shows, and offering subcategories of each, the new look may improve viewers’ ability to find programs in specific genres. The company hasn’t decided yet whether to implement the design later this year.

‘Growth Opportunities’“They are the clear leader in their space and still have growth opportunities,” Andy Hargreaves, an analyst with Pacific Crest Securities in Portland, Oregon, said in a telephone interview. He has an outperform rating on the stock and a target of $130 a share.

“We had estimated their customers watched about 850 million hours per month in June, and they exceeded that,” he said. “People are watching more and there are more people watching.”

High content costs, which are expected to increase, may impede growth, Michael Pachter, an analyst at Wedbush Securities Inc. in Los Angeles, said in an interview. He has an underperform rating on Netflix, with a target of $45 a share.

“Content owners have complete control because Netflix can’t obtain it from elsewhere,” Pachter said. If content owners charge Netflix more, margins will be squeezed, and if quality is sacrificed to keep costs down, Netflix risks losing viewers, he said.

“The jump in the hours watched seems high, there is only a certain amount of time a day to watch television,” he said.