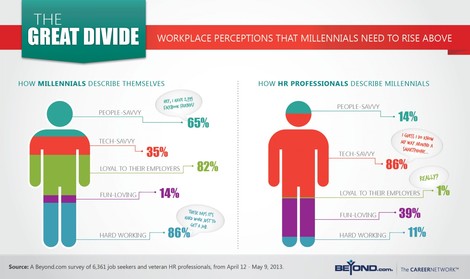 Click to enlarge the image
When it comes to the future of the US, the biggest question mark by far is anything relating to the Millennial generation, those Americans born between 1980 and 2000, which happens to be one of the biggest generations in US history.

In fact, the largest US age cohort is currently the 23 year olds. However, Millennials are different from previous generations in many ways. For example, today’s 25-34 year olds are more likely to be minorities (40%) and a higher share of them has college degrees (35%). In addition, they are choosing different fields of study in college: while engineering was in the top five bachelors’ degrees awarded in 1980, in 2010, psychology replaced it in the top five rankings. This student debt-bubble funded college infatuation also happens to be the biggest curse of the Millennials, and as discussed a year ago, "Millennials Are Devastated As American Dream Becomes Nightmare For Most."

Still, despite their differences, and the over $1 trillion in student debt which is making the US economic recovery virtually impossible, Millennials are in many ways like prior generations. Or rather better be if there is to be any hope of the conventional Keynesian medicine fixing a problem that may be at its core demographic (just like in Japan).

In order to get a better grasp of the wants and needs, as well as problems and liabilities of the Millennial generation, we present various extensive charts that highlight the key issues surrounding those young Americans which are gradually entering their post-college careers only to find pervasive disappointment.

First, as noted, here is the size of the Millennial generation in context: 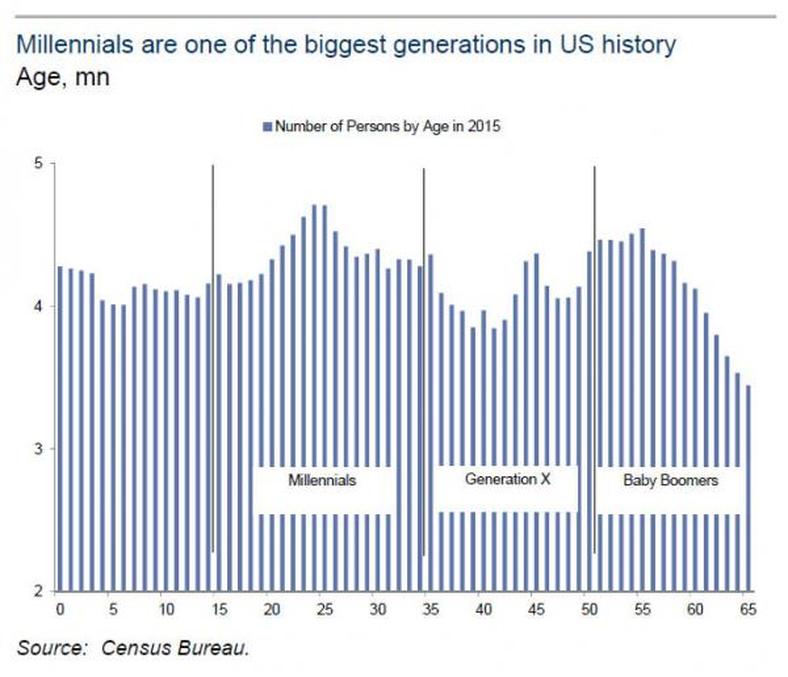 They may be everywhere, but their job opportunities are limited, and not only in the US... 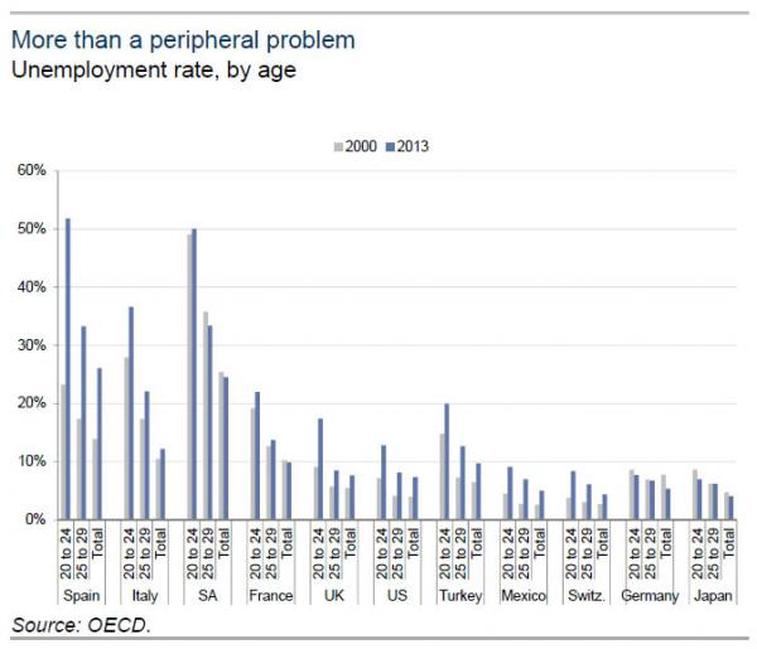 Which is also pushing the labor participation rate lower. Sorry BLS apologists: it has nothing to do with demographics and everything to do with global economic depression. 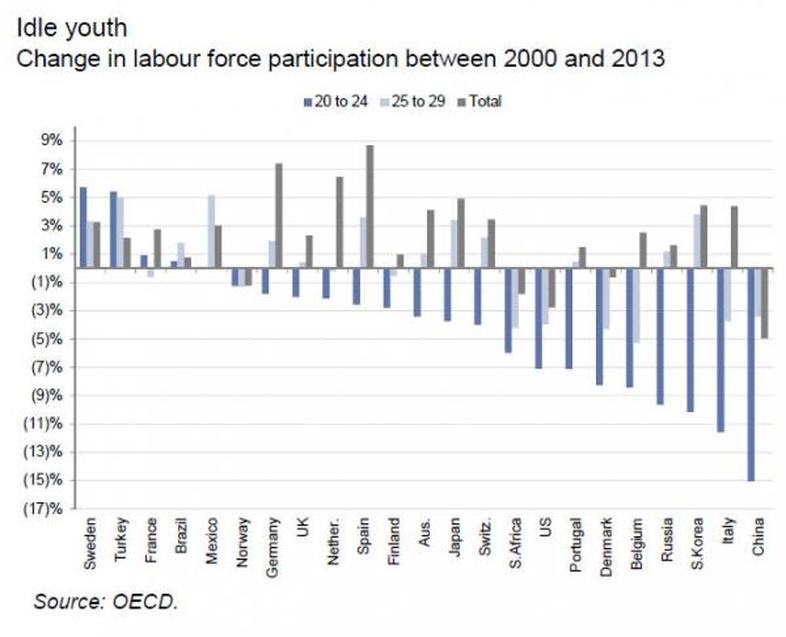 So without job opportunities, Millennials are forced to spend more and more time in a state of suspended occupational animation while hoping for better days. 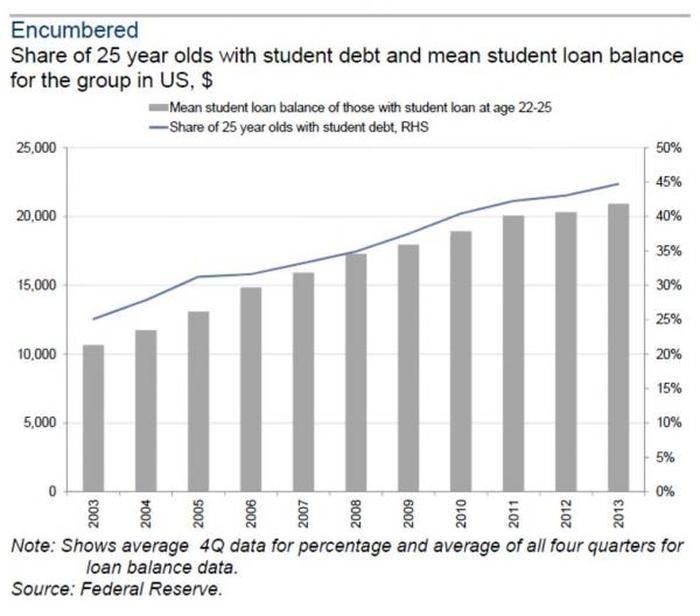 Although as we noted earlier this week, record "student debt" is not just a young person problem any more: increasingly people in their 50s, 60s and 70s are crippled by loans they took out to help their professional development, which they find they simply can't pay back. 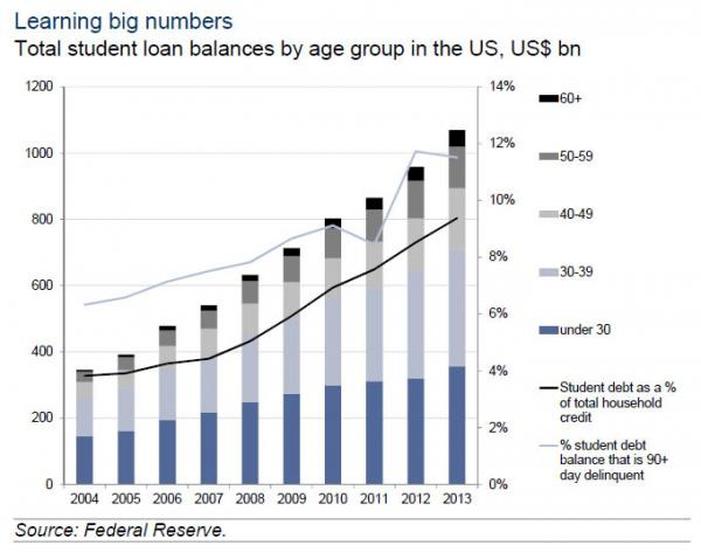 Still, there is some hope that the college (and student debt) bubble are bursting: college admissions in the past two years have declined. 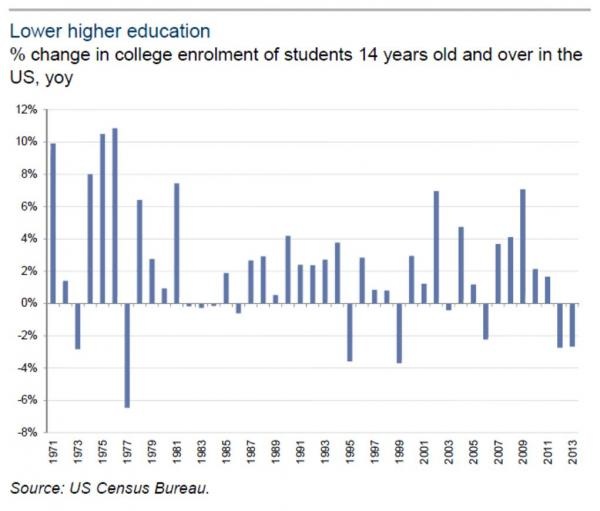 So with fewer job opportunities available to Millennials, and with virtually no wage growth to talk of (for anyone, not just the young), it is not surprising that median incomes for those in the late 20s and early 30s have stagnated, usually at the expense of those 2-3 decades older. 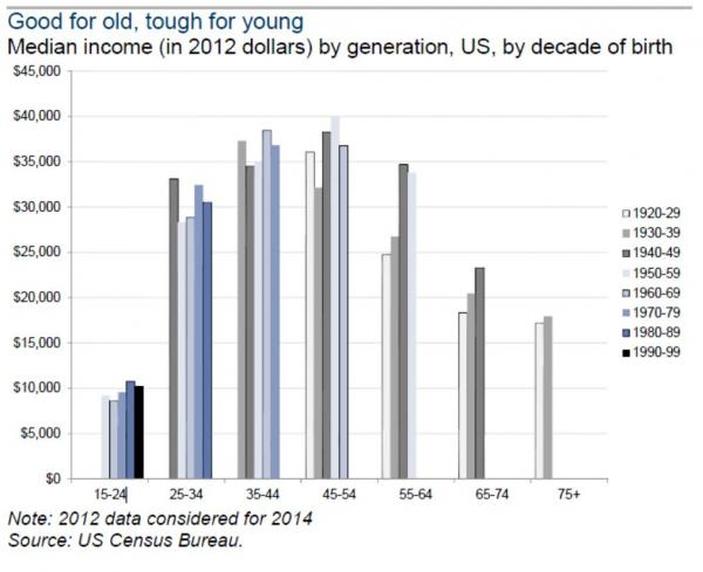 In fact, of all nations, America's youth seem to be the most disadvantaged of all relative to the national average in recent years (whether Gen X and mostly the Baby Boomers are to blame is a different topic entirely. 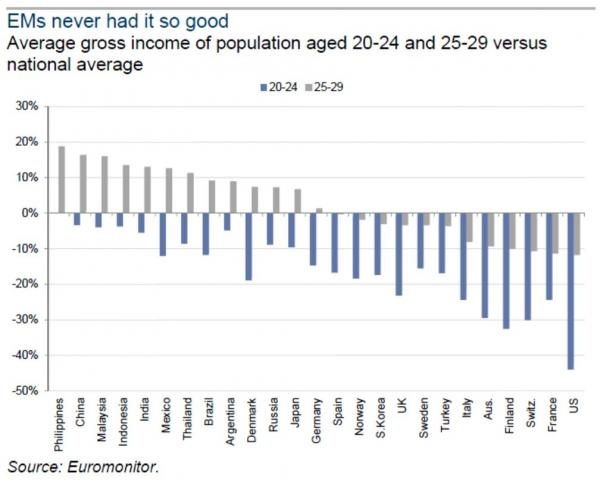 The simplest way to show the lost income opportunity for Millennials is the following chart of median income for 25-34 year olds as a % of total: 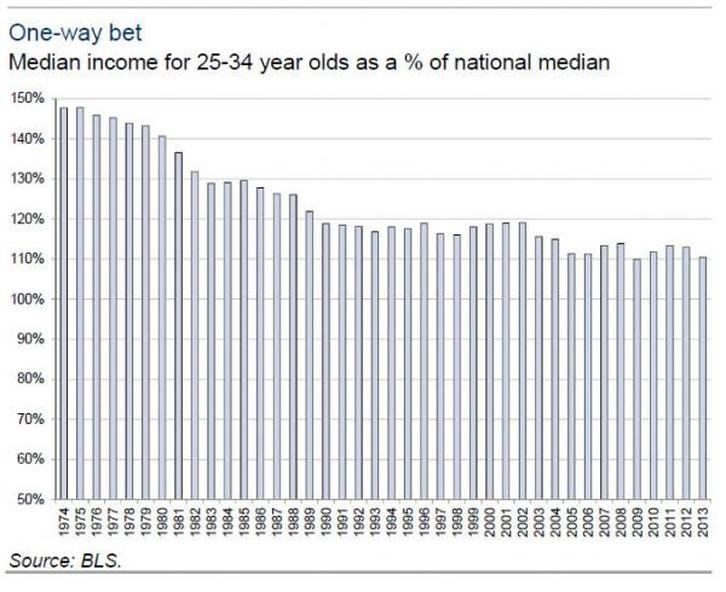 With less disposable income, and thus fewer assets, today's youth is finding it ever more difficult to build up a solid credit history... 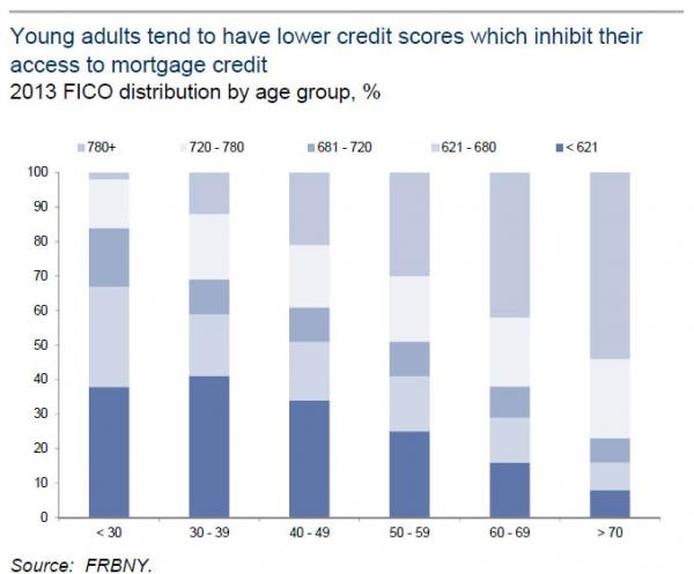 ... which  means with less credit available, they have to save up cash for rainy days... 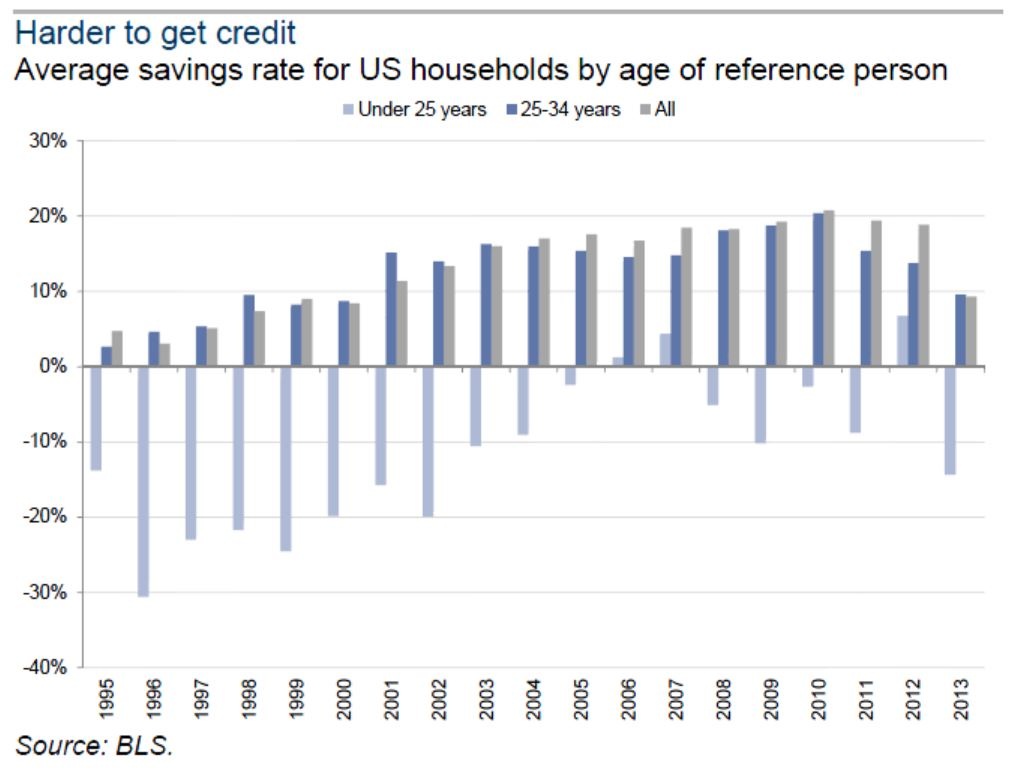 ... and another logical outcome: fewer can afford to buy homes and start families, instead choosing to live in their parents' basement... 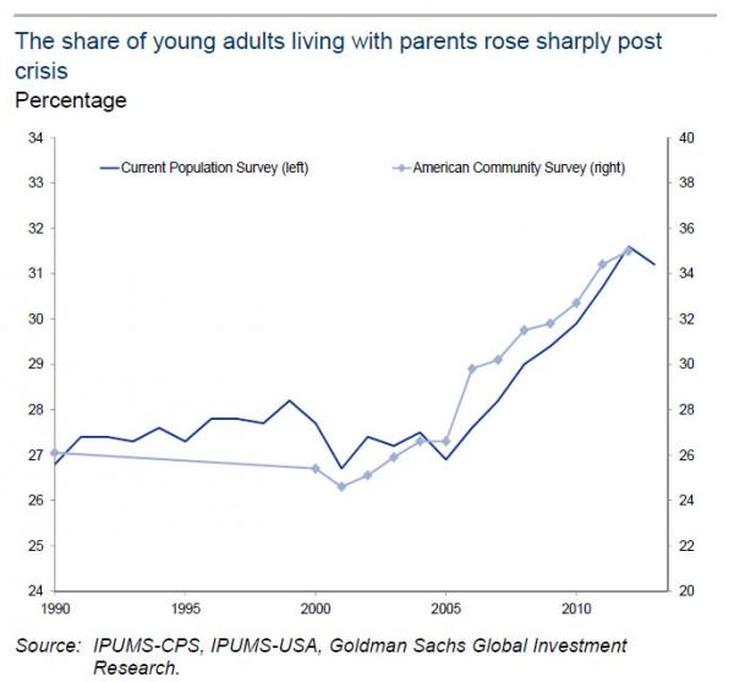 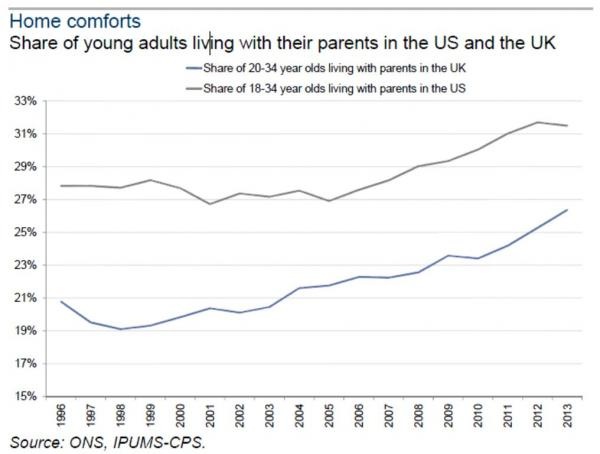 ... which assures that a Japanese style demographic collapse is just a matter of time. 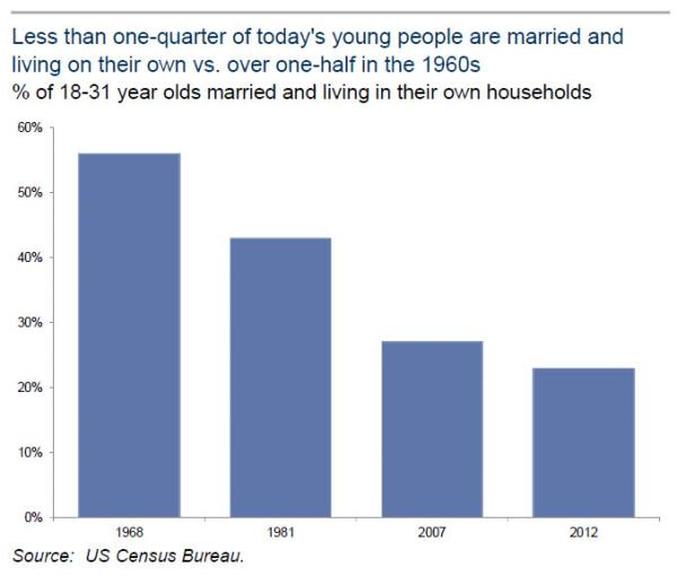 It also means that the old American Dream of buying a home is increasingly impossible for most. The new American dream: renting. 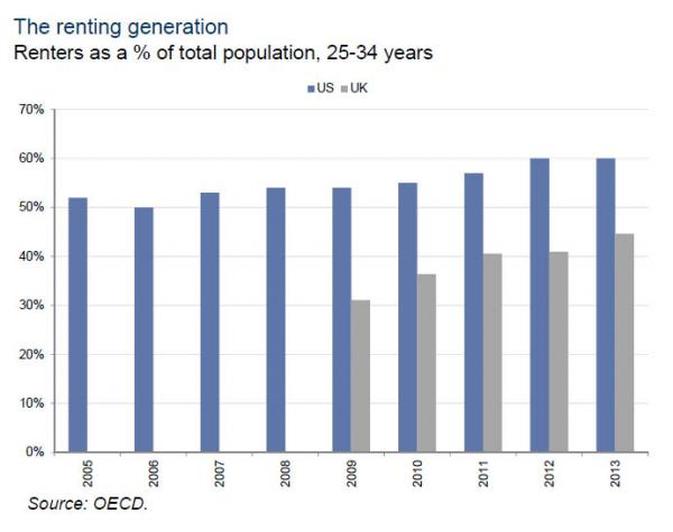 To summarize the Millennial predicament: overeducated, with less disposable income and drowning in student loans. Yet like every other generation before them, they too have needs, wants and desires. In the purely materialistic realm these are the key needs as self-reported by Millennials. 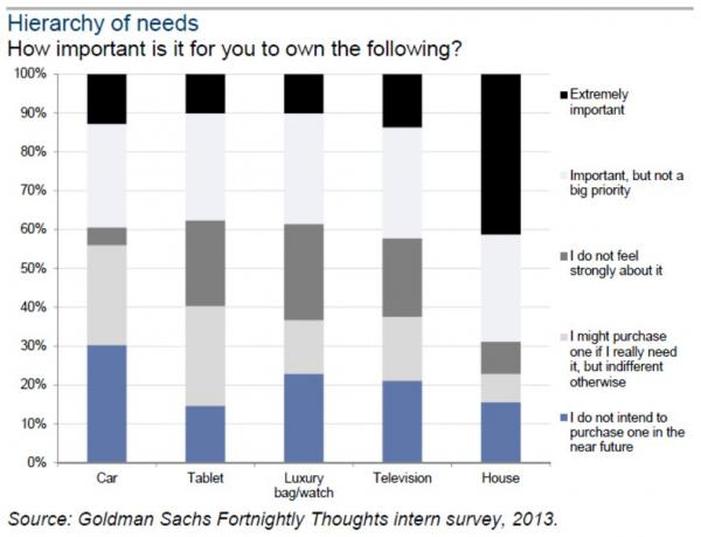 The charts below summarize what they spend money on compared to all households: 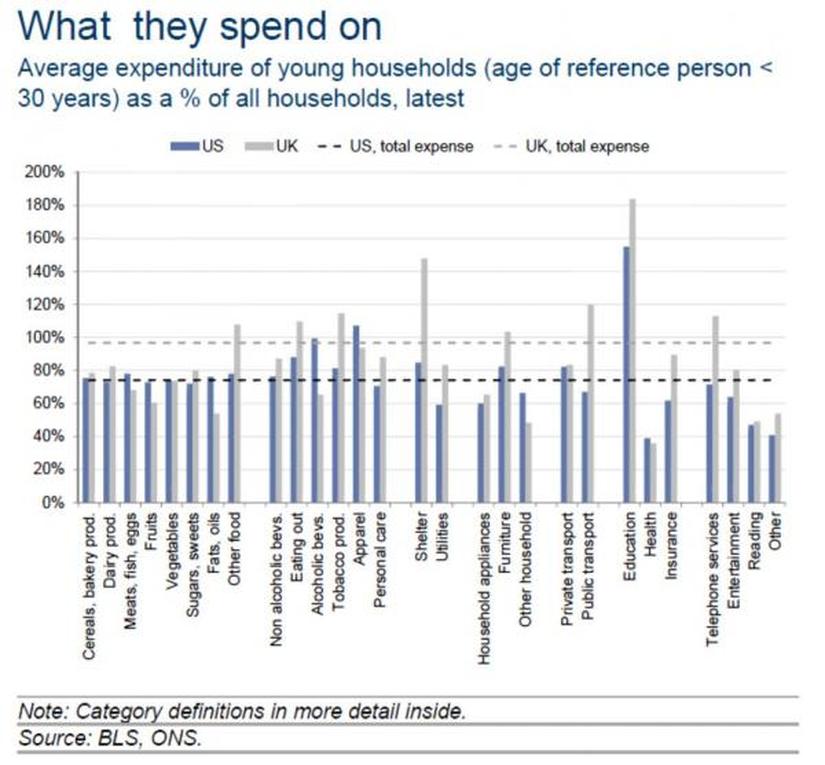 Somewhat curiously, there hasn't been a dramatic change in the distribution of household spending over the past two decades: 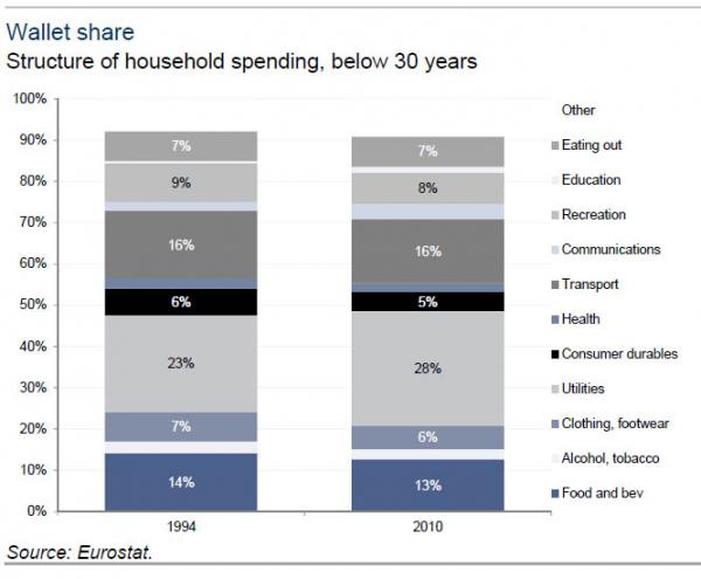 Still, there is a notable shift in more recent years, especially when it comes to discretionary spending and education. 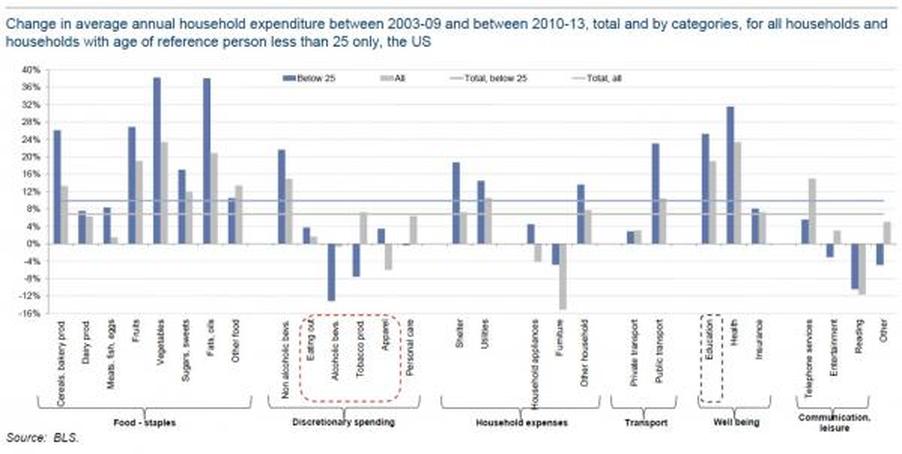 They may not have much disposable income, but they do have a vocal brand preference. 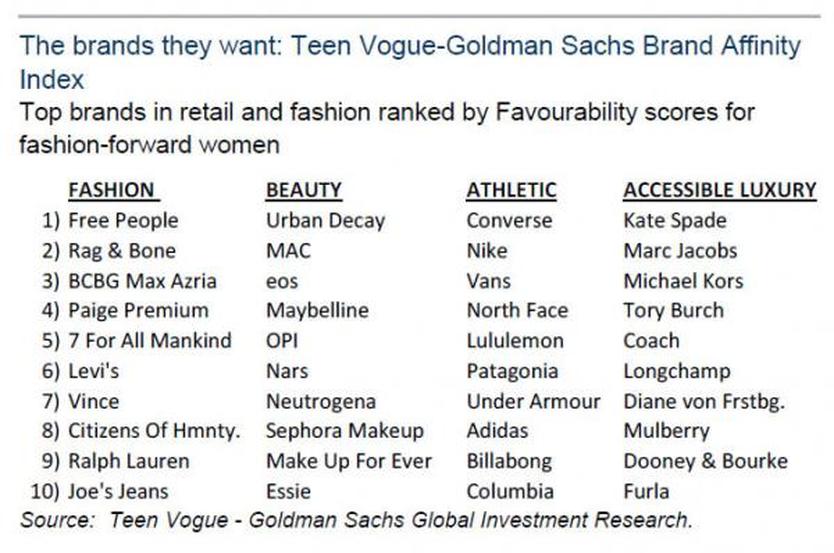 And while it is unclear if today's youth consumes fewer calories due to health reasons or simply because it can't afford to eat as much (or simply is getting better at self-delusion when reporting consumption patterns)... 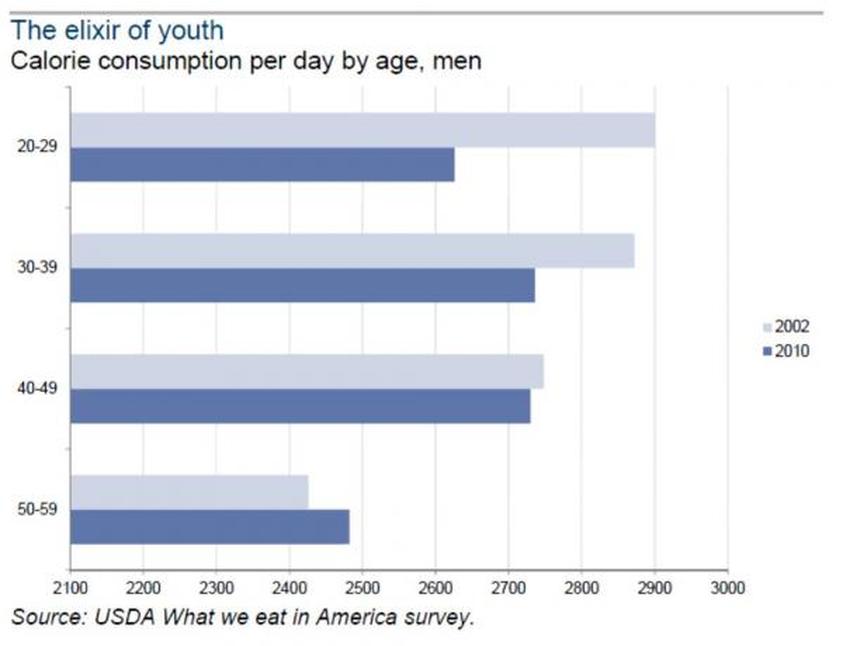 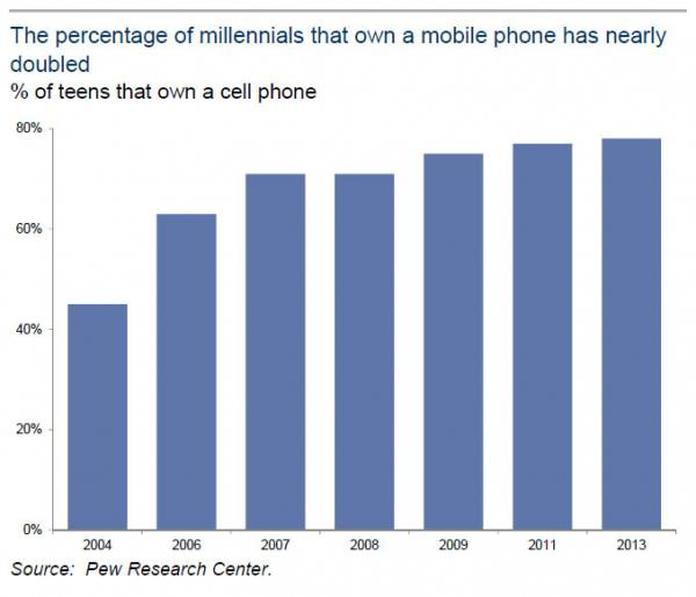 ... and their online video.

So with all that bad news, what are Millennials to do? Why drown their sorrow in booze of course. Or rather, beer: that may be all they can afford these days. 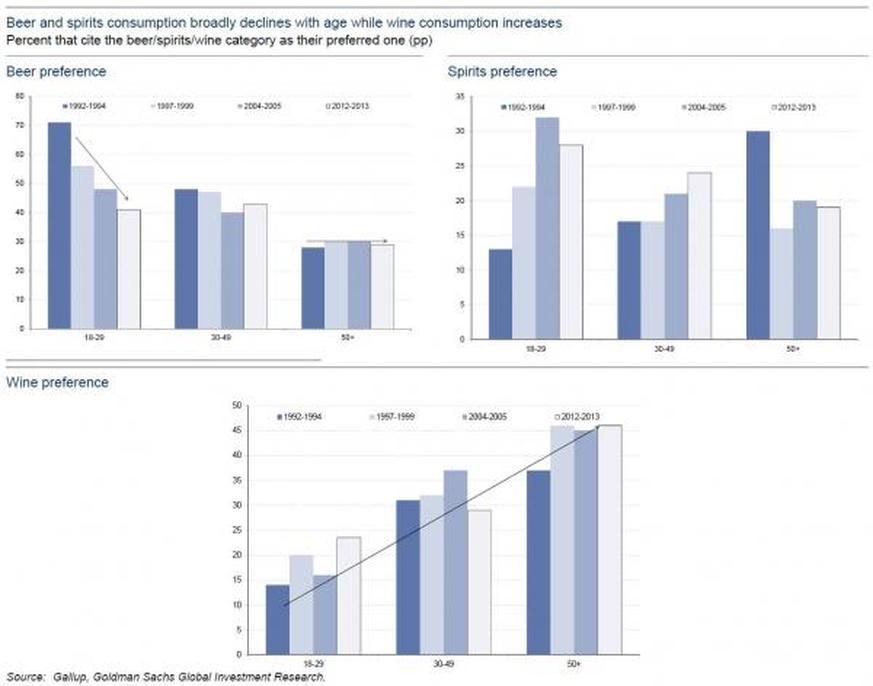 Finally, for those who want to put all this together and invest based on the above information, here is a quick snapshot from Goldman of what the bank's preferred Millennial-inspired strategies are: 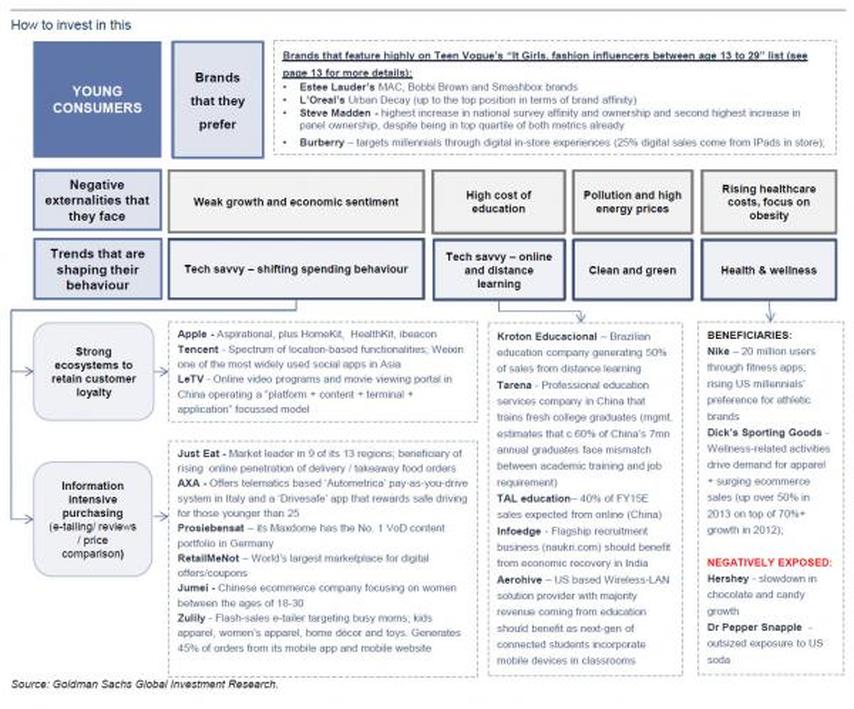