How Mobile Video Can Drive the Future of Brand Marketing

THE RUNDOWN
Mobile is a small but mighty screen when it comes to grabbing millennials' attention. New research by Google and Ipsos shows that the small screen has the potential to drive big impact: On a typical day, for those 18- to 34-year-olds who own a smartphone, the smartphone reaches them more than any other device. Moreover, viewing video on smartphones is far less distracted than it is on TV. Based on the findings, there are two ways that online video may create new opportunities on mobile for brand marketing. First, think multi-screen, build for mobile. Second, create in-the-moment experiences with mobile.
Introduction

Of all minutes watched on YouTube, 40% is on smartphones,* which presents an opportunity for brand marketers. Yet understandably, since smartphone screens have shrunk advertising space to the size of a playing card, the effectiveness of mobile in holding consumers' attention and driving impact has been questioned. So how do you build a successful mobile campaign to drive results?

To answer this question, Google and Ipsos researched 1,519 smartphone owners aged 18- to 34-years-old who were asked to keep a detailed diary of all of their online and offline video interactions for a day. To get a representative snapshot, participants were spaced across weekends and weekdays. The research required respondents to use a mobile app; hence the results are limited to millennials who own a smartphone—81% of individuals age 18 to 34 own a smartphone, according to MRI. The results show that when millennials watch video on smartphones, they are far less distracted than when watching video on any other screen, including TV.
More attention given to video on mobile

Smartphones are the #1 device to reach millennials. In a typical day, 98% of 18- to 34-year-olds reported using smartphones to watch video content in the research—that's higher than the reach of any other device among smartphone-owning millennials.

Broad reach of millennials via smartphones aside, the research reveals something even more powerful about the experience of watching video on smartphones: It's far less distracted. Video watching on TV was the sole activity just 28% of the time—meaning that only 28% of TV-viewing occasions were uninterrupted and fully garnered the users' attention.

The rest of the time, participants were involved with another activity—such as eating, using a computer, chatting to a friend or cooking—as they were watching TV. Alternatively, video watching was the sole activity for 53% of mobile video sessions.

Home isn't the only place millennials are watching mobile video. Thirty-four percent of mobile video minutes were watched while people were out and about. People watching digital video outside the home are also 1.8x more likely than average to be meaningfully engaged because they are likely to be watching video for active purposes, such as looking for information or exploring a passion.

While marketers have traditionally sought consumers' attention in their living rooms, sitting in front of a television, mobile video consumption is changing that.
How to make mobile video work for your brand

Smartphones have become an integral part of people's lives. So how can marketers successfully make this an opportunity to connect with their audiences? Here are two tips:

In a multi-screen world, mobile shouldn't be thought of as just the second screen—the behaviors observed in this research suggest that mobile is important as a main screen. What role can video play for your campaigns on smartphones compared to TV or laptop? What companion experience can you build using smartphones?

As mobile captures consumers' full attention, at home or on the go, brands now have the opportunity to reach people anywhere. How can brands deliver in-the-moment, real-time experiences to make use of that full attention?

Volkswagen's SmileDrive app used the power of mobile and YouTube to turn people's morning commute into a shareable experience, reaching more than 200,000 people and capturing moments on the go.

Click the image to read the entire article
Mobile Has Bumped TV as America's First Screen. 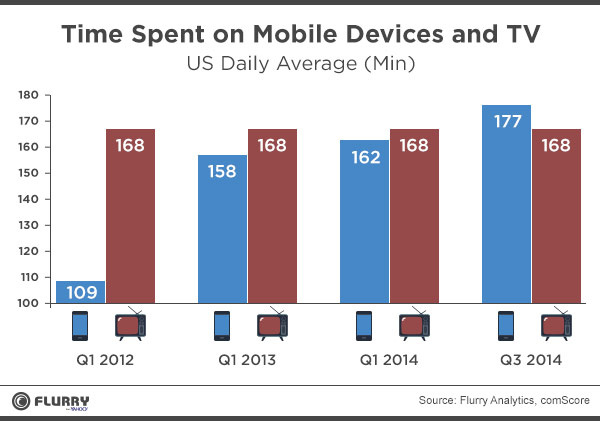 While we don’t have a way to measure the overlap in time spent, other than our own families’ experiences, we believe that there is plenty of overlap between the time spent on TV and that on mobile devices. It is a tall order to believe that the smart device (and app) industry, which didn’t exist six and half years ago, can take out an industry entrenched in every American household since the middle of the last century. But it has happened. Smart devices are practical, and areglued to consumers 24/7/365. Those factors, combined with the content explosion on these devices through millions of apps, helped mobile snatch the big prize from television. As of September 2014, it is a new world in the American living room.