Facebook burnout: 61% of users have needed a break
Key Findings 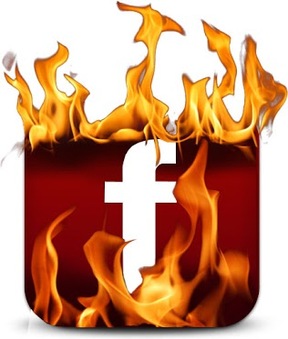 We asked the 61% of Facebook users who have taken a break from using the site to tell us in their own words why they did so, and they mentioned a variety of reasons. The largest group (21%) said that their “Facebook vacation” was a result of being too busy with other demands or not having time to spend on the site. Others pointed toward a general lack of interest in the site itself (10% mentioned this in one way or another), an absence of compelling content (10%), excessive gossip or “drama” from their friends (9%), or concerns that they were spending too much time on the site and needed to take a break (8%). 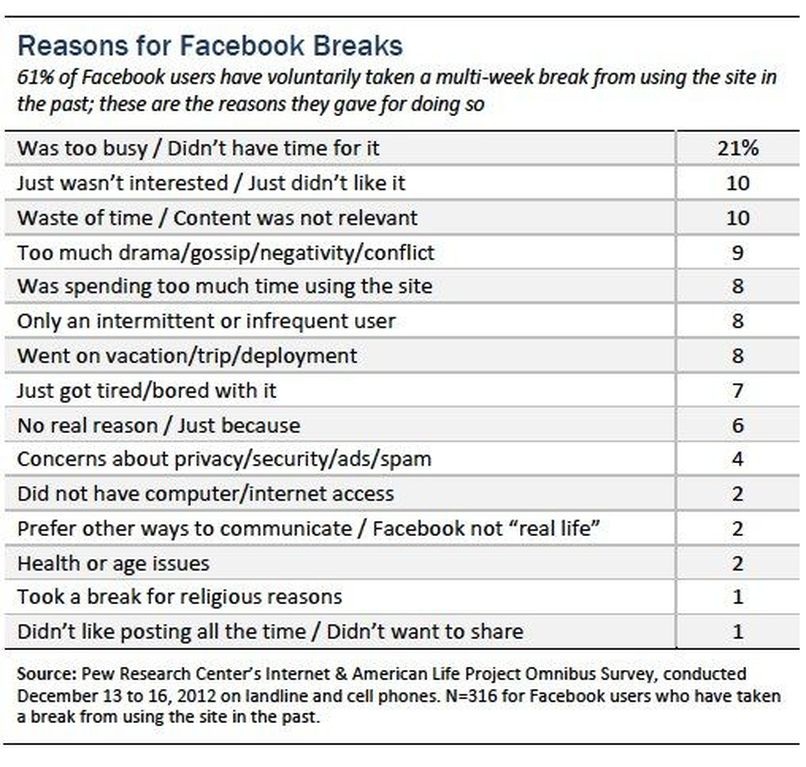 Some of the verbatim thoughts from those who took Facebook breaks include the following: “I was tired of stupid comments.” …  “[I had] crazy friends. I did not want to be contacted.” … “I took a break when it got boring.” …  “It was not getting me anywhere.” …  “Too much drama.” ... “You get burned out on it after a while.” … “I gave it up for Lent.” … “I was fasting.” … “People were [posting] what they had for dinner.” …  “I didn’t like being monitored.” … “I got harassed by someone from my past who looked me up.”…  “I don’t like their privacy policy.” … “It caused problems in my [romantic] relationship.”

One in five online adults (20%) say that they used Facebook in the past but no longer do so, and we also asked this group to tell us—in their own words—what made them stop using the site.  Although the number of respondents who answered this question is too small to report detailed percentages, their answers covered many of the same themes of those who continue to use Facebook but have taken a break in the past. Some of their direct thoughts: “It’s a gossipy thing.” … “I didn’t like to talk too much.” … “I’m not social.” … “My account was compromised.” …  “I got tired of minding everybody else’s business.” …  “Not enough privacy.” … “Got too many communications.” … “Takes my time away.”

Findings in context: social networking site users are checking in more frequently than ever

When asked in the mid-December Omnibus survey to assess the amount of time they spend on Facebook and the general value of Facebook in their lives, a majority of users say the site is as important now as it was a year ago and about half say they use the site as much now as they did a year ago. However, notable numbers point to a decreasing value and a decline in usage over the past year.
Women are more likely than men to report increased importance and greater time spent on the site. Some 16% of female users (and 7% of men) say that Facebook has become more important to them over the last year, and 16% of female users (and 9% of men) say that they spend more time on the site now than they did a year ago.

On the other hand, some 42% of Facebook users ages 18-29 and 34% of those ages 30-49 say that the time they spend on Facebook on a typical day has decreasedover the last year — these are both significantly higher than the 23% of users ages  50 and older who report decreased Facebook usage over the same time period. 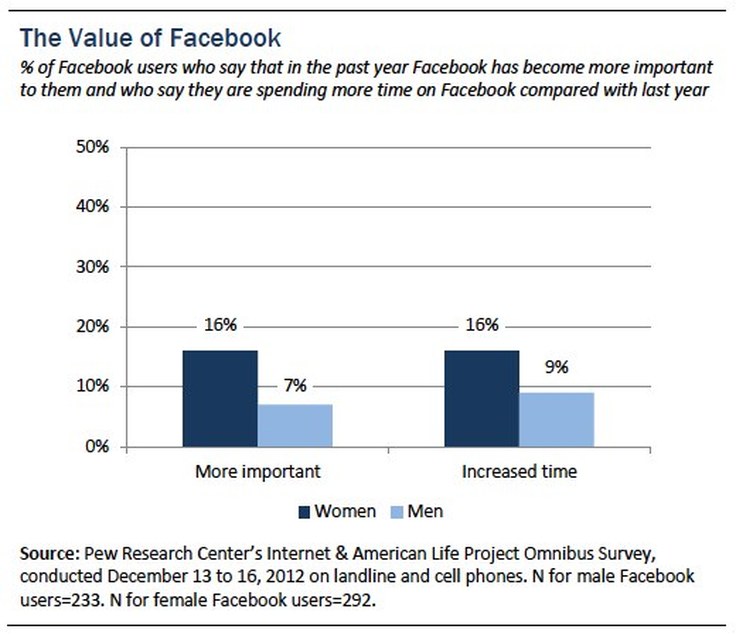 Asked about their plans for the coming year, most current users of Facebook say they expect their usage levels will stay about the same. But around one in four say they plan to cut back on their Facebook usage in 2013:
Young adults are the most likely forecasters of decreased engagement. Some 38% of Facebook users ages 18-29 expect to spend less time using the site in 2013, although a majority of users across age groups anticipate that their Facebook usage will remain largely stable in the year to come. 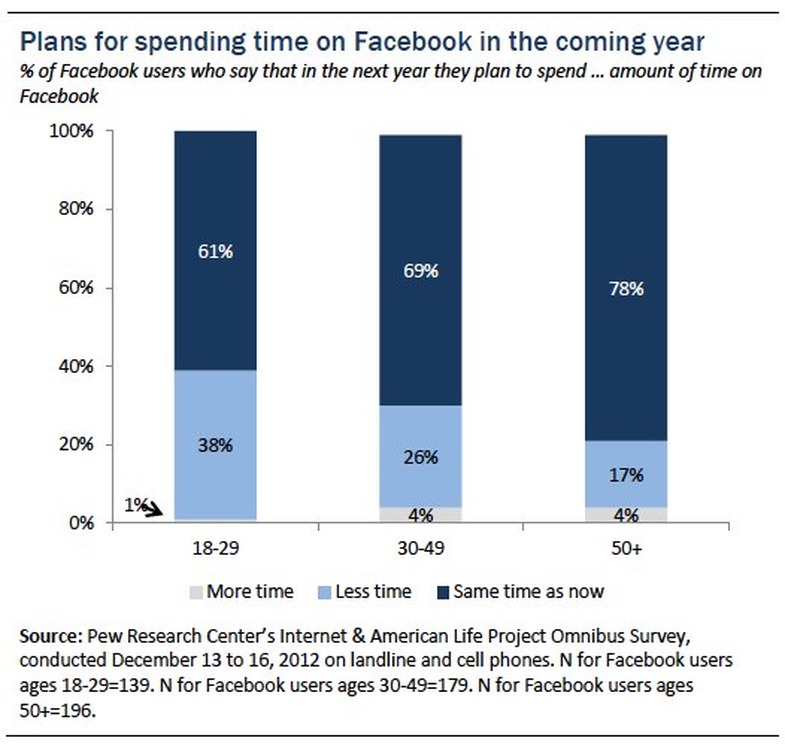 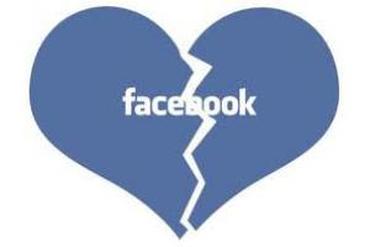 Click the image to read the original article
Around two-thirds of all online Americans use Facebook, but nearly two-thirds of those report having taken long breaks from the social network, while others have already given up on it, according to a new study from the Pew Research Center.

In the study's findings published on Tuesday, 61 per cent of current Facebook users said that at one time or another they had voluntarily taken a break from the site that lasted several weeks or more.

Furthermore, of those internet users surveyed who said they weren't on Facebook, 20 per cent reported that they had once used it but no longer do.

Both groups cited similar reasons for walking away. But while you might assume that privacy concerns or excessive advertising would be foremost among them, that wasn't the case. In fact, only 4 per cent of respondents cited those reasons – fewer than the number who said they had taken a break "for no real reason" or "just because."

As it happens, the top reason given for taking a "Facebook vacation" was that the site demanded too much attention, with 21 per cent of respondents reporting that they were too busy or didn't have time for it. Similarly, another 8 per cent said they took a break because they were spending too much time on the site.

"You get burned out on it after a while," one survey respondent wrote, while another said, "I took a break when it got boring." The latter sentiment was shared by 7 per cent of those surveyed.

Other respondents were more critical of Facebook and what it had to offer. Facebook's content was perceived as being irrelevant or "a waste of time" by 10 per cent of those surveyed, while another 10 per cent reported that they either didn't like the site or just weren't interested.

Another 9 per cent reported that there was too much conflict, negativity, gossip, or "drama" on Facebook. One former user who had quit the social network reported getting "tired of minding everybody else's business," while another said, "[I had] crazy friends. I did not want to be contacted." 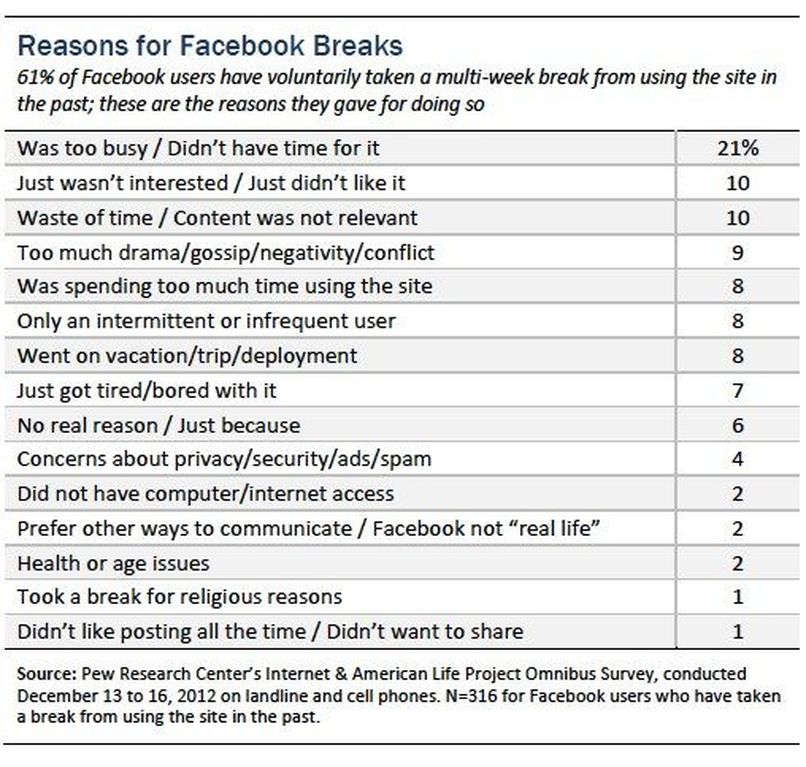 Few of these results are likely to be surprising to anyone who has spent significant time on Facebook. What does seem counterintuitive, however, is that the study found that it was younger users, not older ones, who were more likely to lose interest in the site.

Only 17 per cent of Facebook users aged 50 or above said they planned to spend less time on Facebook in the coming year. Of those users aged 30 to 49, 26 per cent said they were going to cut down. But the figure for 18-to-29-year olds was 38 per cent, suggesting that young adults may already be moving on to the proverbial Next Big Thing.

Similarly, 4 per cent of users aged 30 and older said they expected to increase their Facebook time in the next 12 months, but only 1 per cent of younger users said the same.

Don't expect Zuck & Co. to crash and burn any time soon, though. As the Pew study points out, 69 per cent of online American adults use social networking sites, and of those, 92 per cent have an account on Facebook. Furthermore, across all of the adults surveyed, 69 per cent said they planned to spend the same amount of time on Facebook in the coming year as they did last year.

It seems that for all its perceived faults, Facebook has become an indelible part of American online life. Even the 61 per cent of survey respondents who reported taking a break couldn't stay away for long. And so, to those 20 per cent who say they've quit Facebook, allow this Reg reporter to extend his gnarled index finger and say: "You'll be back! Mark my words ... you'll be back!"