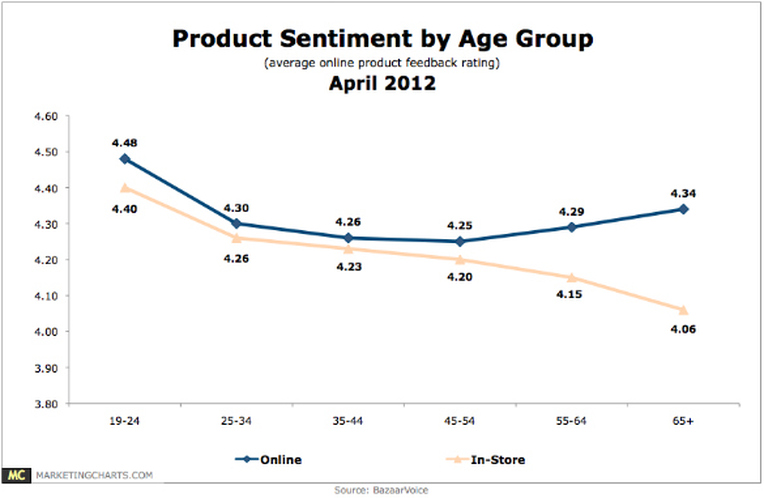 Consumers who buy products online appear more satisfied with their purchases than in-store shoppers, a trend that surprisingly is magnified among the more mature age demographics, details Bazaarvoice in a March 2012 report. Looking at online feedback from both in-store and online shoppers, the company found that the average feedback rating among 19-24-year-olds was 4.48 for their online purchases, compared to 4.40 for their in-store purchases. However, those aged 55-64 were much more likely to report satisfaction with their online than offline purchases (4.29 vs. 4.15), as were those over 65 (4.34 vs. 4.06).

At the same time, although the largest volume of feedback (regardless of purchase channel) comes from consumers in the 35-65 age range, in-store shoppers aged 19-24 are more likely to go online to offer feedback for product purchases, with the likelihood of in-store shoppers doing so decreasing with age. Younger consumers’ propensity to provide feedback is likely related to the importance they place on user-generated content: January 2012 survey results from BazaarVoice indicate that 84% of Millennials (born between roughly 1977 and 1995) report that UGC has some (59%) or a lot (25%) of influence on what they buy, compared to 70% of Boomers (born between roughly 1946 and 1964).

Women Enjoy In-Store Purchases More Than MenData from BazaarVoice’s latest survey appears to lend some weight to the stereotype that women enjoy their shopping trips more than men. Looking at sentiment for in-store purchases, close to three-quarters of women gave the product they purchased a 5-star rating, compared to slightly more than half of the men. Men were about twice as likely to rate the product 4 stars, though (27.7% vs. 13.4%).

Other Findings:About the Data: The BazaarVoice findings are based on a sample of 11+ million pieces of user-generated content generated by contributors on its clients’ sites during the past 3 to 6 months. These data points include consumer-contributed content from around the world.